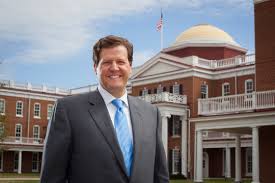 W. Taylor Reveley IV is the 26th president of Longwood University.  His term began June 1, 2013. Reveley previously served as the managing director of the University of Virginia’s Miller Center, a nonpartisan institute focused on the U.S. presidency, policy and political history.

Reveley graduated with honors from Princeton University, where he majored in classics and was also a student athlete as a member of the football team.  He received a master’s degree from Union Presbyterian Seminary and J.D. from the University of Virginia.  His wife, Marlo, is a vice president with Allianz Global Assistance, and they have two children.